In my last post, I talked about writing unit tests using xUnit. Today, I want to go one step further and will talk about writing acceptance tests (ATDD) using xBehave. xBehave is an extension of xUnit for describing tests using natural language. The advantage of the natural language description is that non-technical stakeholder like a manager can read the test report and understand what was tested.

For writing tests I use the following NuGet packages and extensions:

To start, I use the code of my last demo which can be found on GitHub.

A test in xBehave always has the attribute Scenario. As previously mentioned, xBehave describes the tests using natural language. The default describing patter is Given, When, Then. Other patterns are possible like the classic Arrange, Act, Assert or xSpec style with Establish, Because, It. You could even extend xBehave and use your own attribute name and vocabulary. If you have more than one operation for the same, you can combine them with And, for example, “Given an employee” “And another employee”.

In the Given or Arrange phase, you set up all the objects you need to run your test. In my example test, I only need one employee object, You could set up several objects and combine them with And.

Setting up two employee objects for the tests

In the When or Act phase, you call the methods, you want to test. In my example, I add the hours worked during the week to my employee.

Executing a method with my test object

In the Then or Assert phase, you check if the value or result is what you expected. In my example, I check if the salary of the employee has the value I expect.

Evaluate the result of the previous operation

You can always return to a previous phase. For example, after the salary check from above, you can have another method call with when and then another assert with then.

Executing code before the test

In xUnit, the constructor of the class is called before a test is executed. xBehave is very similar, but instead of the constructor, it calls the method with the Background attribute. Usually, the method is also called Background but you can choose whatever name fits best for you.

Setting up code before the test execution

Adding parameters to your test

In xBehave you can add parameters to your test with the parameter Example. It works the same way as InlindeData in xUnit. You add values and then have matching parameters in the method signature.

Add parameters to your test

Instead of Example, you can use any attribute which inherits from DataAttribute, for example, MemberData.

Variables inside your test

If you want to assign a value to a variable within your test, you can pass this variable as a parameter. Each parameter which does not have a corresponding example value (based purely on the number of values/parameters) continues to have its default value passed (null for reference types and zero values for value types).

To exclude a scenario from execution, you can apply the skip attribute and provide a message. It works the same way as in xUnit.

Faking objects and calls within the test

You can set up fake objects and fake calls the same way as in xUnit, using a faking framework like FakeItEasy. 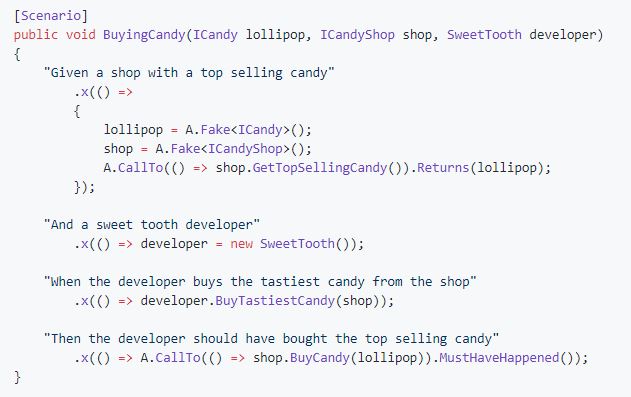 In this post, I gave a quick overview of xBehave and explained how to set up your scenarios and how to clean up afterward.

You can find the code of my demo on GitHub.

Nowadays it should be a no-brainer to write automated tests when developing or changing features. Unfortunately, the reality is different. In the last couple of weeks, I worked with several teams w...

In this post, I will explain the basics of xUnit and how to write unit tests with it. xUnit is an open source testing framework for the .NET framework and was written by the inventor of NUnit v2. M...