Use AAD Authentication for Pods running in AKS

Since the dawn of time, authentication has been a problem for developers and security engineers. Weak passwords make it easy for attackers to get access to areas where they don’t belong. Even if you have a very long and complex password, you might be at risk. Passwords get leaked almost every day nowadays. The current recommendation for authentication is passwordless. This means that no password exists anymore and you authenticate with an authenticator app or a security key.

This approach is safe but not possible for applications. This is where Azure Active Directory authentication comes into play. Resources in Azure can authenticate using their identity and then get an access token from AAD. Using these identities is quite easy with standard resources like App Service or Key Vault but not as easy when using Kubernetes.

Today, I would like to show you how you can configure your Azure Kubernetes Service cluster to use AAD Pod Identity to authenticate against the AAD.

What are Managed Identities

Some resources in Azure like App Service or Azure Container Registry allow you to enable a managed identity directly on that service. This identity is created in the Azure AD and shares the same lifecycle as the service instance. When you delete the service, the system-assigned managed identity will be also deleted. 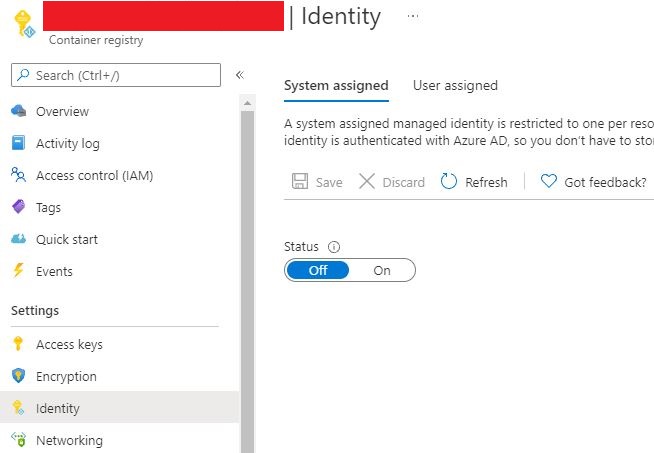 Enabling managed identities for applications in AKS, so-called pod identities, is unfortunately not straightforward. There are different documentation but neither of them works reliably. You can find a demo integration on GitHub but the documentation is missing some steps and the scripts did not work for me (mostly due to wrong file paths).

Follow this guide to install pod identity on your AKS cluster and then test it with a demo application. Afterwards, I will go into the details of what is happening.

Set up your AKS Cluster for Pod Identities

For this tutorial, I will assume that you have no AKS cluster created yet. This demo uses the Azure CLI and bash. Before you begin, create a couple of variables, which you can use throughout this demo. Note to replace the value of SubscriptionId with the Id of your Azure Subscription.

Next, create an AKS cluster with a managed identity and the azure network plugin.

This finishes the setup of the AKS cluster. Connect to your newly created cluster and let’s continue to configure the pod identity.

Install the AAD Pod Identity Helm chart using Helm. If you do not know Helm, see Helm - Getting Started for more information. Add and install the Helm chart with the following command:

After the installation is finished, you will see a message to verify that all associated pods have been started. Use the following command to check that:

This should show that all pods are running.

Next, create a new identity and export its client Id and Id:

With this identity, create a new Kubernetes object of the type AzureIdentity and add the identity Id and client Id to it.

Optionally, you could save the AzureIdentity in a file and then apply this file. If you are using this approach, you have to replace the variables with their actual values though.

The last step of the configuration of pod identities is to create an AzureIdentityBinding using the following command:

Test the usage of the Pod Identity

Microsoft has a test application that will retrieve a token and give you a success message when the operation is completed. If something went wrong, you will see an error message. Deploy the test application with the following command:

Wait for around a minute and then check the logs of the pod. You can do this either using kubectl or a dashboard. Kubectl gives you a wall of text that might be hard to read.

I prefer Octant as my dashboard. You can find more information about the usage and installation in Azure Kubernetes Service - Getting Started.

The token was retrieved successfully

What happens inside Kubernetes when adding Pod Identity

There was a lot going on during the demo which might be hard to understand at first. Let’s go through it step by step.

The AKS cluster is created with the flag –network-plugin azure. AKS supports two network modes, kubenet and azure, whereas kubenet is the default mode.

AAD Pod Identity is disabled by default on clusters using the Kubnet network mode. This is due to security concerns because Kubenet is susceptible to APR spoofing. This makes it possible for pods to impersonate other pods and gain access to resources that they are not allowed to access. The Azure network plugin prevents ARP Spoofing.

After the cluster is installed, the code creates a service principal. This service principal is used to authenticate against the AAD and retrieve tokens for the pods. Adding the Managed Identity Operator and Virtual Machine Contributor roles to the service principal is necessary so it can assign and un-assign identities from the worker nodes that run on the VM scale set.

The Managed Identity Controller (MIC) monitors pods through the Kubernetes API Server. When the MIC detects any changes, it adds or deletes AzureAssignedIdentity if needed. Keep in mind that the identity is applied when a pod is scheduled. This means if you change your configuration, you have to re-schedule your pods for the changes to be applied.

The Node Managed Identity (NMI) intercepts traffic on all nodes and makes an Azure Active Directory Authentication Library (ADAL) request to get a token on behalf of the pods. The request to get a token is sent to the Azure Instance Metadata Service (IMDS) at 169.254.169.254. The answer is redirected to the NMI pod due to changes to the iptable rules of the nodes.

The following screenshot shows the workflow of the token acquisition. 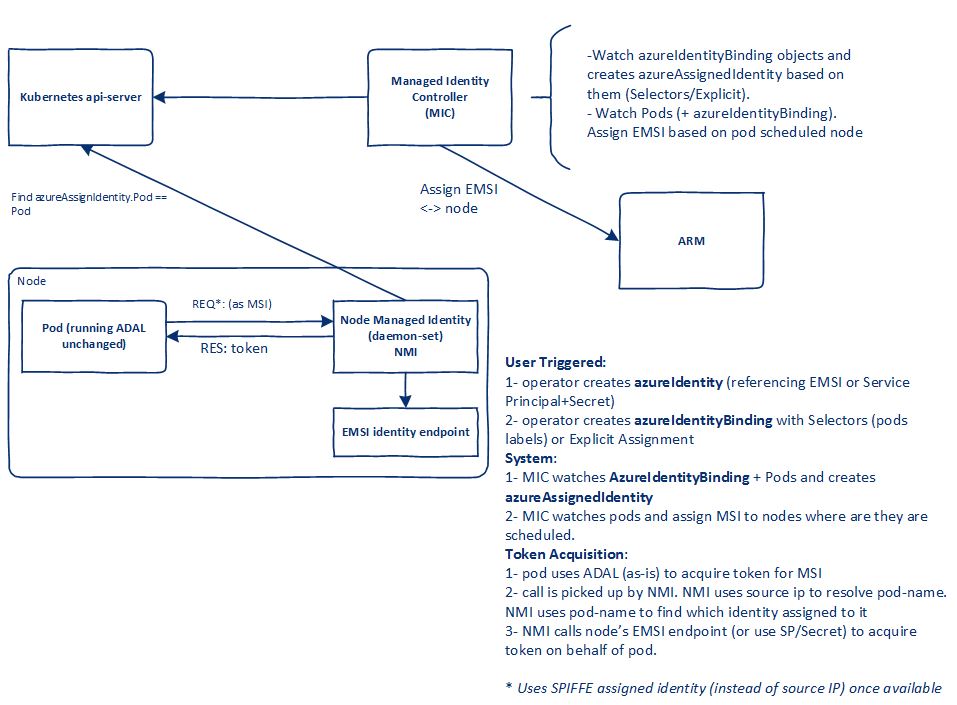 You can use the following code to uninstall pod identity.

The iptables that got modified by the NMI pods should be cleaned up automatically when the pod identity pods are uninstalled. If the pods get terminated unexpectedly, the entries in the iptables are not removed. You can do that with the following commands:

Using AAD authentication in Azure Kubernetes Service is unfortunately not straightforward, especially since the documentation is missing some crucial information. Nevertheless, going passwordless is definitely worth the hassle and will make it easier to manage your applications in the future.

In my last post, I created an Nginx ingress controller and assigned different URLs to its public URL. The Nginx controller analyses the URL and routes the traffic automatically to the right applica...