Split up the CI/CD Pipeline into two Pipelines

Modern DevOps is all about delivering high-quality features in a safe and fast way. So far, I am using a single pipeline for all of my CI/CD. This works fine but also makes it harder to make changes in the future. In software development, we have the Single Responsibility Principle (SRP) which states that a class or method should only do one thing. This makes the code simpler and easier to understand. The same principle can be applied to the CI/CD pipeline.

This post shows how to split up the existing CI/CD pipeline into a CI and a CD pipeline. The separation will make the pipelines simpler and therefore will promote the ability to make changes quickly in the future.

Things to consider before splitting up the CI/CD Pipeline

Splitting up the pipeline into a separate CI and CD pipeline is quite simple and barely needs any changes. If you are new to this series, check out Improve Azure DevOps YAML Pipelines with Templates first and read about the templates used in the CI/CD pipeline.

The only thing you have to consider before splitting up the CI/CD pipeline is how the CD pipeline knows that it should run and how it can access files from the CI pipeline.

Edit the Pipeline for Continuous Integration

Continuous Integration or CI means that you want to integrate new features always into the master branch and have the branch in a deployable state. This means that I have to calculate the build version number, build the Docker image, push it to Dockerhub and create the Helm package which will be used in the CD pipeline for the deployment. All this exists already and the only step I have to add is publishing the values.yaml file and the Helm package to the ArtifactStagingDirectory. This is a built-in variable of Azure DevOps and allows the CD pipeline to access the Helm package and the config file during the deployment.

The changes are made in the CreateHelmPackage template. The whole template looks as follows:

Splitting up the CI and CD part also helps to make the pipeline smaller. For example, only around half of the variables are needed for the CI pipeline. The whole CI pipeline looks as follows:

The Continuous Deployment (CD) pipeline might look a bit complicated at first, but it is almost the same as it was before. The first step is to create a new file, called CustomerApi-CD in the pipelines folder and then configure a trigger to run the pipeline after the CI pipeline. This can be achieved with the pipelines section at the top of the pipeline. 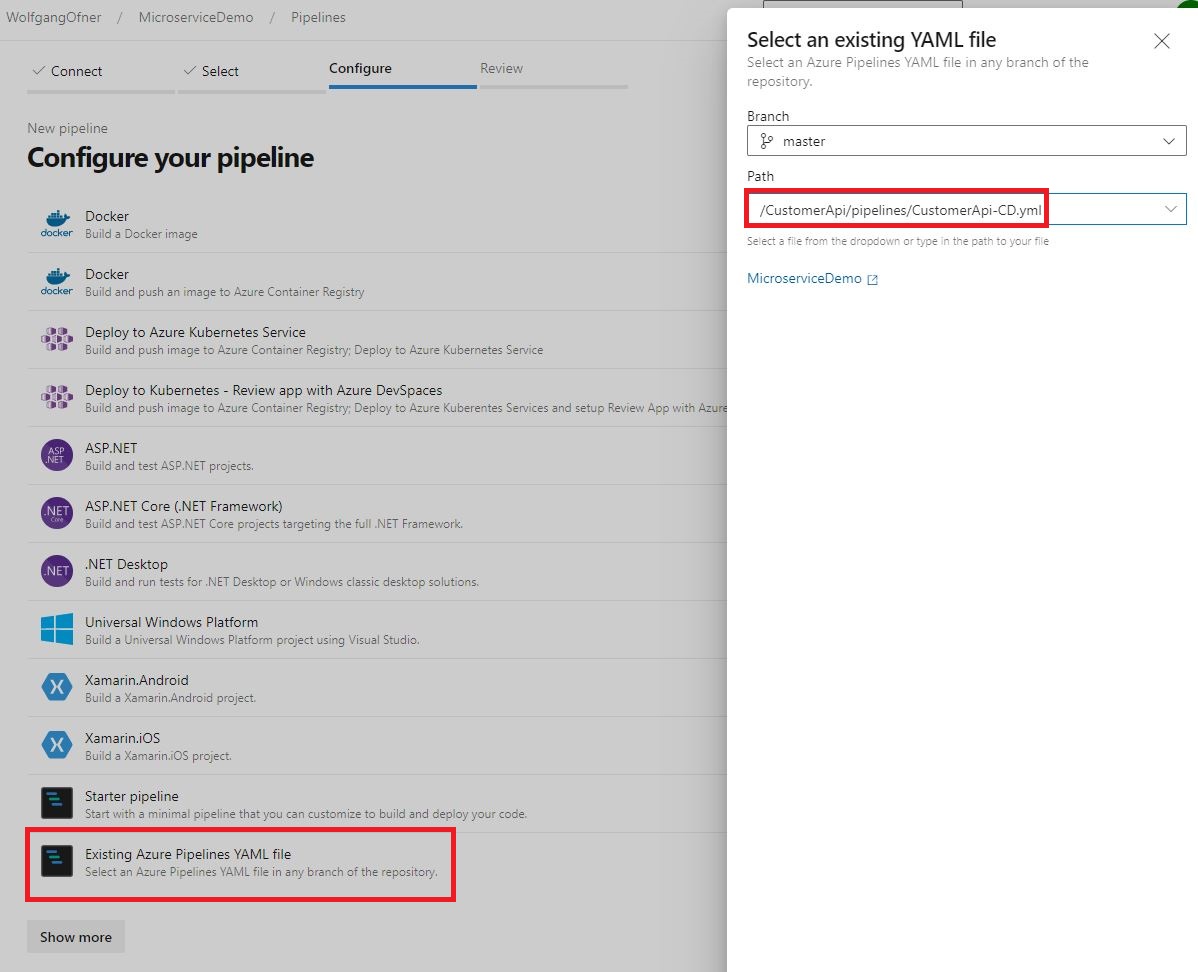 If you used any secret variables, for example, for the database password, do not forget to add them to the new CD pipeline before you start the deployment.

Run the CI pipeline and after the build is finished, the CD pipeline will kick off and deploy the application. After the deployment is finished, open your browser and enter your URL (configured in the URL variable in the CD pipeline) and you should see the Swagger UI of the microservice. 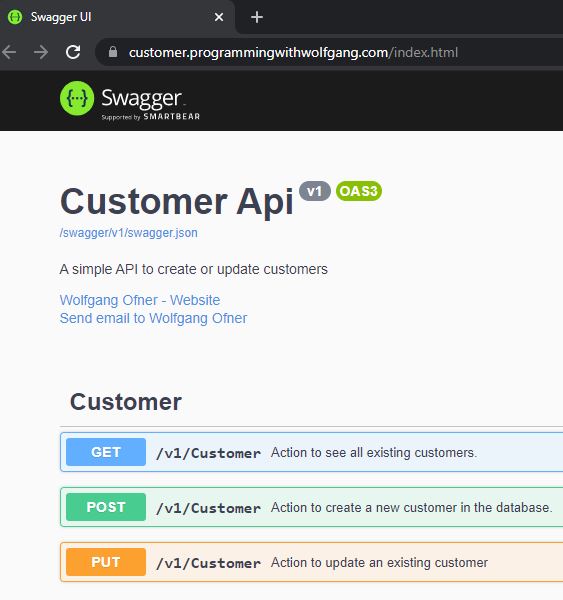 The Microservice is running

To access the microservice using the URL, you have to configure the DNS accordingly. See Configure custom URLs to access Microservices running in Kubernetes to learn how to do that using an Nginx ingress controller.

Using two pipelines, one for CI, and one for CD can be achieved quite easily and helps you to keep the complexity inside the pipelines at a minimum. This allows you to add new features, for example, new environments fast and with a smaller chance of making any mistakes.

In my next post, I will use the newly created CD pipeline and add a production stage with its own URL and database deployment.

Istio in Kubernetes - Getting Started

My last post introduced the concept of a service mesh and how it can help to manage your Kubernetes cluster, especially with hundreds or thousands of pods running. The post was only theoretical and...

Use Istio to manage your Microservices

In my last post, I talked about Istio and how it can be installed. I also mentioned some of the features of the service mesh but only in theory. This post will show you some features of Istio, how...