The Template Method pattern helps to create the skeleton of an algorithm. This skeleton provides one or many methods which can be altered by subclasses but which don’t change the algorithm’s structure. 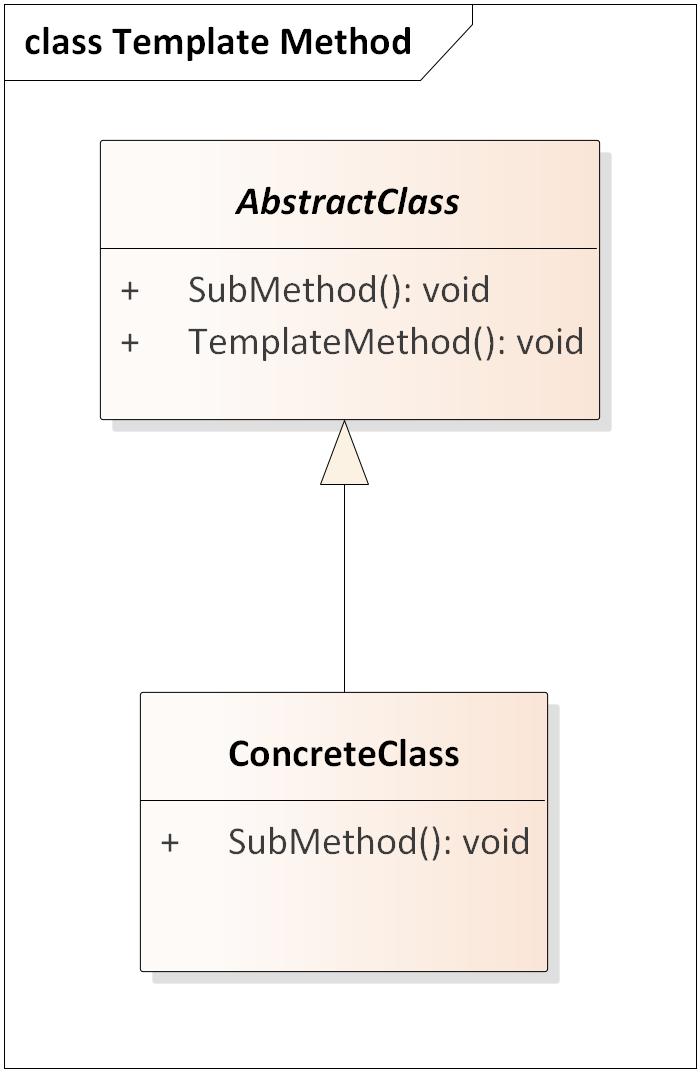 Implementation of the Template Method pattern

To be honest, the Template Method was pretty confusing to me in the beginning but after I tried to implement it, it became clear how it works. My implementation is pretty simple but it helped me to understand the pattern and I hope it helps you too.

I want to do some calculation and then save the result somewhere. The algorithm has three steps whereas step two and three can be overridden by a subclass. The class Calculator offers the TemplateMethod. This method contains the three steps. 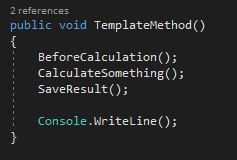 Implementation of CalculateSomething in the CalculatorSqlAzure class

The CalculatorOracle class only overrides the CalculateSomething method.

Implementation of CalculateSomething in the CalculatorOracle class

I know that this example is not really what you will see in a real-world project but I hope that it helped you to understand the Template Method pattern. You can find the source code on GitHub.

The Template Method pattern to achieve a clean design. The algorithm provided by the base class is closed for modification but is open for extension by subclasses. As a result, your design satisfies the open-closed principle. The pattern also helps to implement the Hollywood principle (“Don’t call us, we call you”).

One downside is that the steps of the algorithm must be already known when the pattern is applied. Therefore the Template Method pattern is great for reuse but it is not as flexible as for example the Strategy pattern.

Strategy: Inject a complete algorithm implementation into another module

Decorator: Compose an algorithm or behavior from several sub-parts

Factory: Define a common interface for creating new instances of types with many implementations

I showed how the Template Method pattern can be used to provide a skeleton for an algorithm. One or many parts of this algorithm can be overridden by subclasses. This behavior helps achieving the open-closed principle and therefore a clean overall design. I also implemented a simple example to show how the pattern works.

A part of my job as a software consultant is to analyze existing software to find room for improvement to make the software better or to avoid these mistakes if the software is rewritten soon. The ...

The proxy pattern belongs to the group of structural patterns and is often used for cross cutting-concerns. Proxies can be used to control access, logging, and security features. Another advantage ...

The decorator pattern is a structural design pattern used for dynamically adding behavior to a class without changing the class. You can use multiple decorators to extend the functionality of a cla...

Repository and Unit of Work Pattern