The Facade pattern is often used without the programmer knowing that he uses it. In this post, I want to give the thing a developer often does automatically a name.

The UML diagram for the facade pattern is pretty empty. It only shows the facade which is called by a client and that it calls methods of subsystems. These subsystems can be classes within your own system but also third party libraries or calls to web services.

Implementation without the Facade Pattern

In this example, I am implementing a fake API which provides information for books. The API has three methods: LookUpAuthor, LookUpPublisher and LookUpTitle. All three methods take the ISBN as string Parameter and also return a string. To get the information for a specific ISBN, every method has to be called. 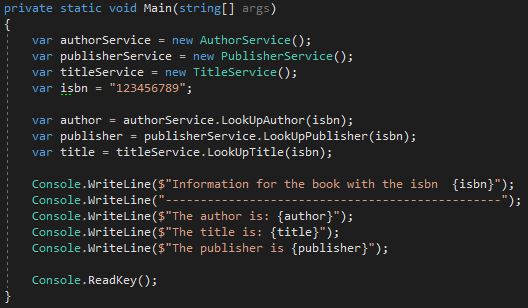 Implementation of API calls without the Facade Pattern

This is ok when you have three methods but what if you also want to get information about the year of publication, related books from the author or an excerpt of the book? This would increase the methods very quickly and as a result, would bloat the code. Imagine this code with 10 services for every attribute of a book. This would be nasty to use. The solution to this problem is to implement a facade.

You can find the source code of this example on GitHub.

Implementation of the Facade Pattern

To hide all the service calls, I implement a facade which takes the ISBN as Parameter and returns all values from the service calls. Additionally to the facade, I implement a Book class, which holds all the information about a book and which is returned by the facade. It is quite common that facades have helper classes which contain all the information from different method calls. 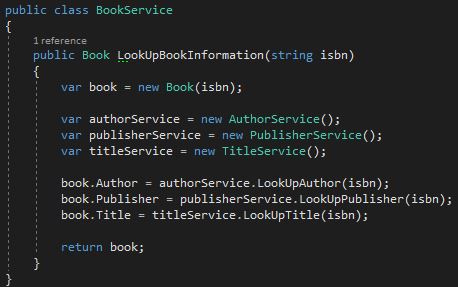 Implementation of the BookService class

With this implementation, i can tidy up the main method and end up with only one method call.

You can find the source code of this example on GitHub.

In this post, I showed the Advantages of using the Facade pattern. I also presented an example without the pattern and how to refactor the code to tidy it up.

A part of my job as a software consultant is to analyze existing software to find room for improvement to make the software better or to avoid these mistakes if the software is rewritten soon. The ...

The proxy pattern belongs to the group of structural patterns and is often used for cross cutting-concerns. Proxies can be used to control access, logging, and security features. Another advantage ...

The decorator pattern is a structural design pattern used for dynamically adding behavior to a class without changing the class. You can use multiple decorators to extend the functionality of a cla...