ASP.NET MVC has five types of filter built-in which allow you to implement additional logic during the request processing.

Before the framework invokes an action, it inspects the method definition to see if it has attributes. If the framework finds one, the methods of this attribute are invoked. As you can see, the ActionFilterAttribute is implemented by IActionFilter and IResultFilter. This class is abstract and enforces you to implement it. The AuthorizeAttribute and HandleErrorAttribute classes already contain useful features therefore you don’t have to derive from them.

Applying a Filter to an Action or Controller 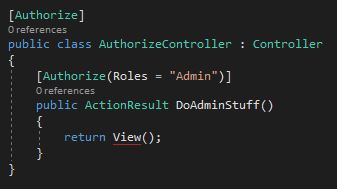 Apply filter to action and controller

On the example above, I applied the Authorize attribute to the controller which means that every action of this controller can be invoked only by logged in users. Additionally, I applied the attribute to the DoAdminStuff and set the Roles to Admin which means that only users which have the admin role are allowed to invoke this action. This example also shows that some attributes can have a parameter to specify the action.

In the last section, I already used one of the two attributes of the Authorize attribute. The available properties are:

If several roles are declared, then the user must have at least one of these roles.

Authentication filters run before any other filter and can also run after an action has been executed but before the ActionResult is processed.

Exception filters are only executed if an unhandled exception has been thrown when invoking an action. An exception can be thrown by:

In this post, I want to talk about how controllers and actions interact with each other and present several built-in functions.  The MVC Framework is endlessly customizable and extensible. As a res...

Routing in ASP.NET MVC can be a really complex topic. In this post, I want to present the most used URL Patterns and explain how they work. Routing with Routes Routes can be created by adding the...

In my last post, I showed how to work with controllers and actions. This included passing data, return types of actions and redirects. In this post, I want to check if my implemented features work ...